You’ve Got to Be Kidding Me!

The other day, while on a video chat with my mom, she asked how things were going and I answered “Well every day there are several ‘You’ve got to be kidding me!’ moments.” She followed up with “Good or bad?” “BOTH!” I responded, and we had a good chuckle. And it’s SO true. 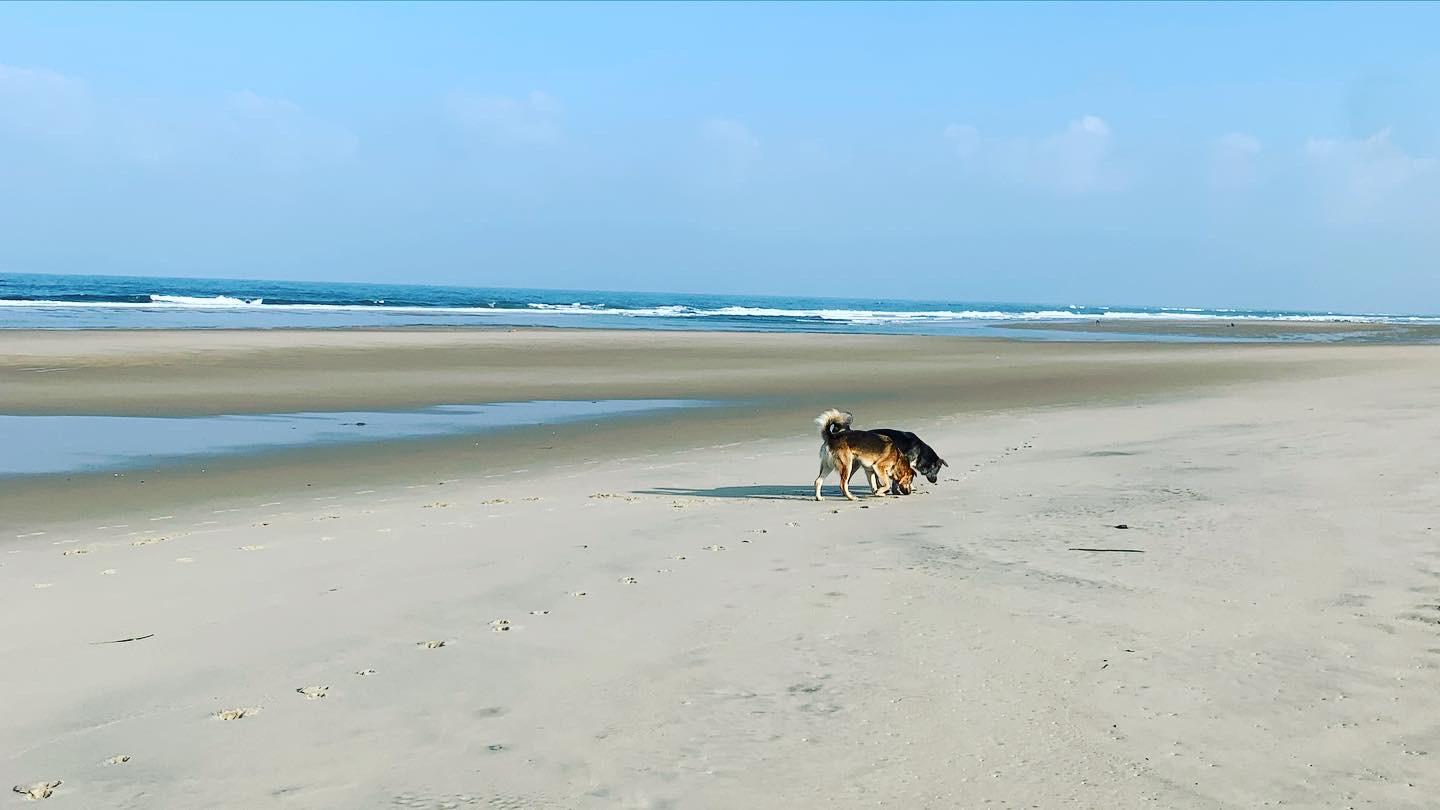 You’ve Got to Be Kidding Me!

Nearly every day there is some obstacle or annoyance that makes me mutter “you’ve got to be kidding me!” But on the flip side, there is ALWAYS a positive utterance of “YGTBKM!”; a spectacular view, a wonderfully new experience, the kindness of a stranger…and the latter ALWAYS outweighs the former. But today, I thought I’d share with ya’ll a couple of the silly and annoying, but ultimately not that big of a deal “YGTBKM” moments I’ve had on this adventure!

That time we got stuck in the mud. As we pulled into our site for the night, a family farm with a lovely orchard, we tried to find the flattest place to park (I never realized the importance of this until cooking, sleeping, well, LIVING, in a vehicle 🤷‍♀️). The ground was a little bit muddy and Ash nonchalantly mentioned that we might have a hard time getting out in the morning. “Might?”, I asked. “Most likely” he replied, “but there’s nothing we can do now, so we may as well enjoy the night! (LOL). “YGTBKM!” I thought, (and probably yelled!). But I realized he was right,(I hate when that happens 😉 ). Welp, morning come, and right he was..again. We were STUCK! After many attempts at troubleshooting, (which included stacking sticks behind tires and me hopelessly trying to push Beni) we determined we would need a tow. So, while I made myself scarce and took the dogs for a walk (I was a wee bit embarrassed by our rookie mistake), Ash called AAA (just kidding!). He went in search of the farmer to ask for his assistance. I’m fairly certain we weren’t the first motorhomers he’s had to rescue as he quickly assessed the situation, hooked his tractor up to our Beni and towed us to solid ground. This is one mistake we won’t make again (I hope!). 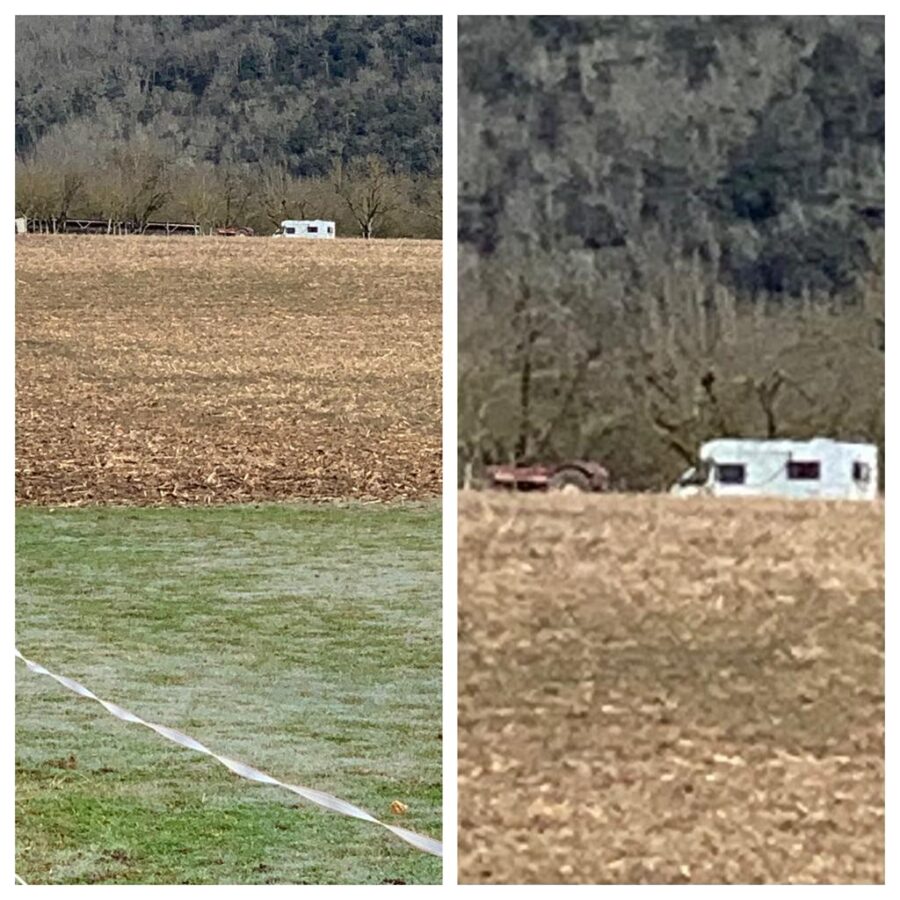 My desire to disappear prevented me from getting a close-up video; but I did snap one pic so ya’ll know it happened!

That time we were left hanging…our laundry, that is! One of the great things we’ve discovered on this trip is the prevalence of 24h outdoor lavarie automatiques (laundromats)- you can find them next to grocery stores, at gas stations, in campsites…etc- and it makes doing laundry on the road fairly convenient. Thus far most have taken credit cards, so when we rolled up to do our laundry on this day we were dismayed to find that this machine accepted only Euros, and, only in coin form. We had already put all our dirties in the machine, so we scrounged between the two of us to get the wash started, but we knew we wouldn’t have enough for the dryer. Did I mention that it was Sunday? For those uninitiated, almost EVERYTHING in France is closed on Sundays. And while I totally support this “rest day” in theory, I have not yet adjusted in practice! So we were quite lucky to find an open boulangerie a few blocks away and I was tasked with going to get change for my 5 euro bill. Upon learning that the shopkeeper would only give me change with a purchase, I bought 4 beignets for 60 cents each, thus leaving the store with a 2 euro coin and 60 cents. Why, you ask did I buy 4 beignets? I cannot give a good answer except that I felt I SHOULD buy at least 2, then learned there were strawberry and chocolate flavours and 3 is not a shareable number! (Yes, I realize my logic here is…not logical!😬).

So back I go with only the 2 Euro coin to add to our laundry money…..yep, you guessed it, NOT ENOUGH TO DRY OUR CLOTHES! So this one was one of those ‘I’ve only got myself to blame’ YGTBKM moments. But as we’ve learned to do, we pivoted into action and turned our CC into the ultimate clothes drying rack. And that night for dessert? You got it, BEIGNETS!😋 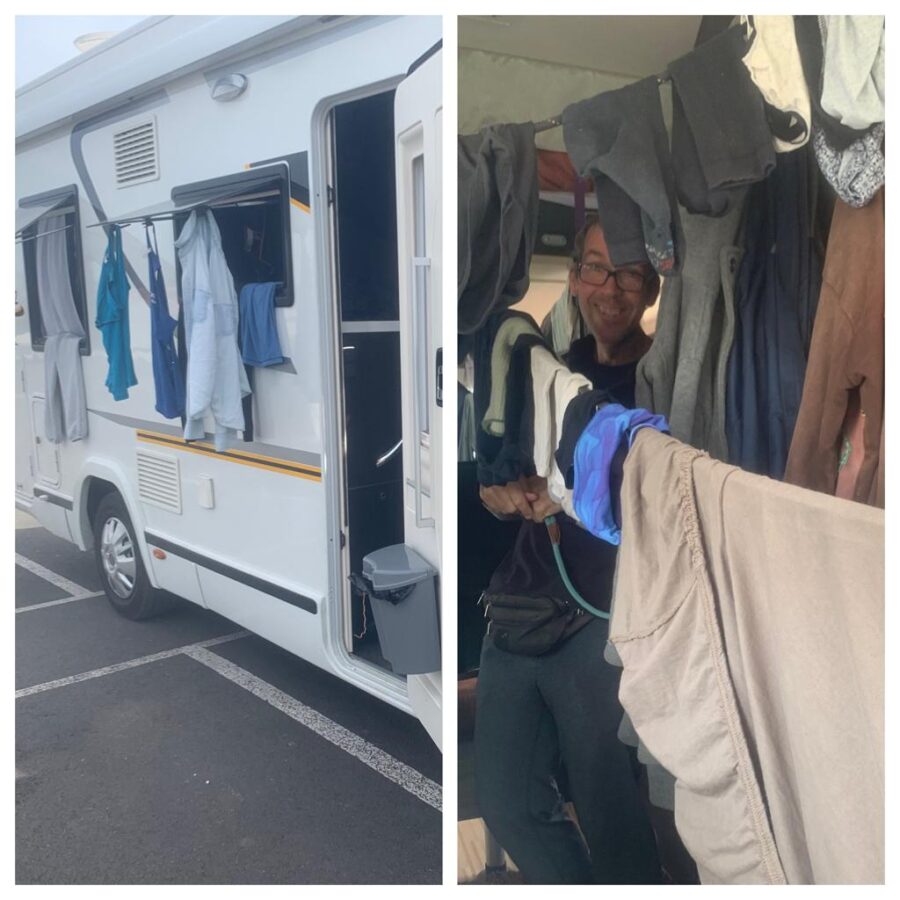 Beni doubling as a clothes line; worked out pretty well in the end!